What does Windows Vista SP1 Mean for Developers?

Aside from the inevitable bug fixes and enhancements to support new hardware types, one of the underlying changes is that SP1 brings the Windows Vista and Windows Server 2008 codebases together.

This is a big deal, but it's surprising how few people have noted it: this is the first time we've ever had a common codebase for Windows that goes all the way from a budget consumer PC right up to a mainframe-class datacenter server. Internally to Microsoft, this makes it easier for us to provide sustained engineering on the product: if we want or need to update a system component, we only have to produce two binaries (x86 and x64) for all languages and product editions. Compare that to the days of Windows XP/2003, when we had maybe 25 different language editions and x86 and x64 variants for both client and server OS releases, and you can see how the testing matrix has become a lot simpler! Externally, the benefit is of course that simply by updating to SP1, you get the benefit of a kernel that has been through an extensive server-hardening process. (Check out this Channel 9 video I recorded last year with Eric Hanson to get just a small flavor of the stress testing work that we do with every build.)

Beyond the kernel and subsystem improvements, Windows Vista SP1 brings major improvements to IIS 7. Comparing the original Windows Vista "RTM" version against that shipped with SP1 is like comparing the basic and premium models of a car - the SP1 version of IIS contains all the features added to create the server-strength edition (with the caveat that Windows Vista SP1 is obviously not licensed for use as a commercial-scale production Internet web server). As a crude measure, compare the two screenshots of the administration console below - the left image is of Windows Vista RTM, the right is of SP1:

You'll see other changes to Windows Vista that affect certain relatively niche groups of developers. Direct3D receives a minor update to 10.1; there are new APIs to control the Data Execution Protection and Kernel Patch Protection features; and there are new cryptographic and random number generation algorithms available for developer use. As ever, more information about these features can be found in the Windows SDK. 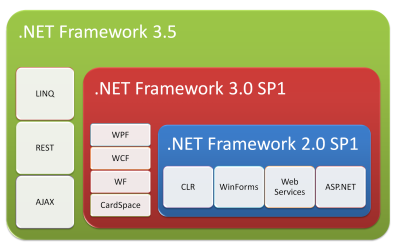 As a .NET developer, you'll notice that Vista SP1 updates the installed .NET components to .NET Framework 3.0 Service Pack 1. The good news is that many of the enhancements from .NET Framework 3.5 are included in 3.0 SP1 - for example, everything apart from System.AddIn and the Firefox XBAP support is included in Windows Vista SP1. This is a little bit confusing, but it probably helps to know that each of the last .NET Framework releases have built on top of each other, rather than existing side-by-side. The diagram to the right demonstrates this.

As a result, all the CLR and class library enhancements that were made to existing assemblies in 3.5 are incorporated in 3.0 SP1 (mscorlib.dll is updated from 2.0.50727.312 to 2.0.50727.1434); the binaries are identical to those shipped with .NET Framework 3.5. The only difference between 3.0 SP1 and 3.5 is that 3.0 SP1 doesn't have any of the new assemblies ("green bits") added in 3.5 for new capabilities like LINQ. Of course, if you've already installed .NET Framework 3.5 on your Windows Vista machine prior to installing SP1, you'll still have the full 3.5 release on your machine afterwards.

The many other nice features in SP1 for end-users and IT Professionals are outside of the scope of this entry, but suffice it to say that some of the major peeves have been addressed: UAC is less aggressive, file copy performance has been greatly improved (and it takes less time to "estimate"!), application compatibility is better, resuming from standby is faster, and over a thousand bugs have been fixed. For more detail on all these items, check out the main Windows Vista Service Pack 1 site.

It's worth noting in closing that many of the above fixes at least have been delivered via Windows Update over the last twelve months. We're moving away from the old-school approach where service packs were the main way that fixes were delivered to a more agile model where patches are available via Windows Update (or its enterprise equivalent, WSUS) and then rolled into a service update at a later stage. The goal is to reduce the gap between us fixing something and you seeing the results of that fix.

Well, what are you waiting for? Go install Windows Vista Service Pack 1!

Ekim 21, 2010
I hope this post will help many of you feel comfortable with using the Content Query Web Part. In this post I will walk you through the process of creating a content query web part and configuring it to show custom field types. I will also give details on how to use XSLT to stylize and format the data being pulled. I will be using the following scenario as an example. Say that you had a site collection with a top level publishing site. This publishing site would display a the most recent blog posts from all blog sites within its own site collection. To solve this problem we will use a Content Query Web Part and a customized ItemStyle.xsl using XSLT. Please note that the “SharePoint Server Publishing Infrastructure” needs to be enabled at the site collection to display the content query web part. Step 1: Add a Content Query Web Part to Page Navigate to the site that you want the blog posts to show up and click on edit page. Under Editing Tools in the Ribb
Yorum Gönder
Devamı