Among the many new user interface features found in SharePoint 2010 there is now greater support for localised sites. In previous versions the main method for getting translated versions of a site was via site variations. Now SharePoint sites can have their user interface presented in various languages. Now I hear you say SharePoint 2007 could do that, just set the language in the site settings and I would have to agree however the difference is that 2010 now support Multiple languages at the same time. A user can select their preferred language to be used when visiting the site simultaneously with another user using a different language!

In order to enable this you need to be running SharePoint server and install the language packs relevant to your users. The Language pack down load site is here http://www.microsoft.com/downloads/details.aspx?displaylang=en&FamilyID=046f16a9-4bce-4149-8679-223755560d54

On the final page you will see checkbox selected offering you the chance to run the products and technologies configuration wizard. You can run this after each language pack install or once after all have been installed which saves a bit of time.

Repeat this for each language pack.

Now logon to the server as a site collection owner 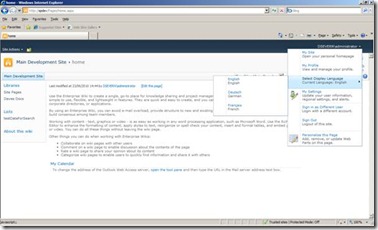 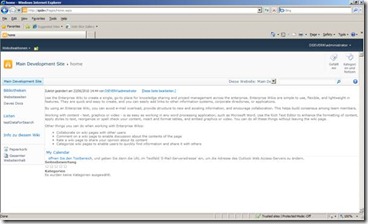 The following are displayed in the selected language

Ekim 21, 2010
I hope this post will help many of you feel comfortable with using the Content Query Web Part. In this post I will walk you through the process of creating a content query web part and configuring it to show custom field types. I will also give details on how to use XSLT to stylize and format the data being pulled. I will be using the following scenario as an example. Say that you had a site collection with a top level publishing site. This publishing site would display a the most recent blog posts from all blog sites within its own site collection. To solve this problem we will use a Content Query Web Part and a customized ItemStyle.xsl using XSLT. Please note that the “SharePoint Server Publishing Infrastructure” needs to be enabled at the site collection to display the content query web part. Step 1: Add a Content Query Web Part to Page Navigate to the site that you want the blog posts to show up and click on edit page. Under Editing Tools in the Ribb
Yorum Gönder
Devamı